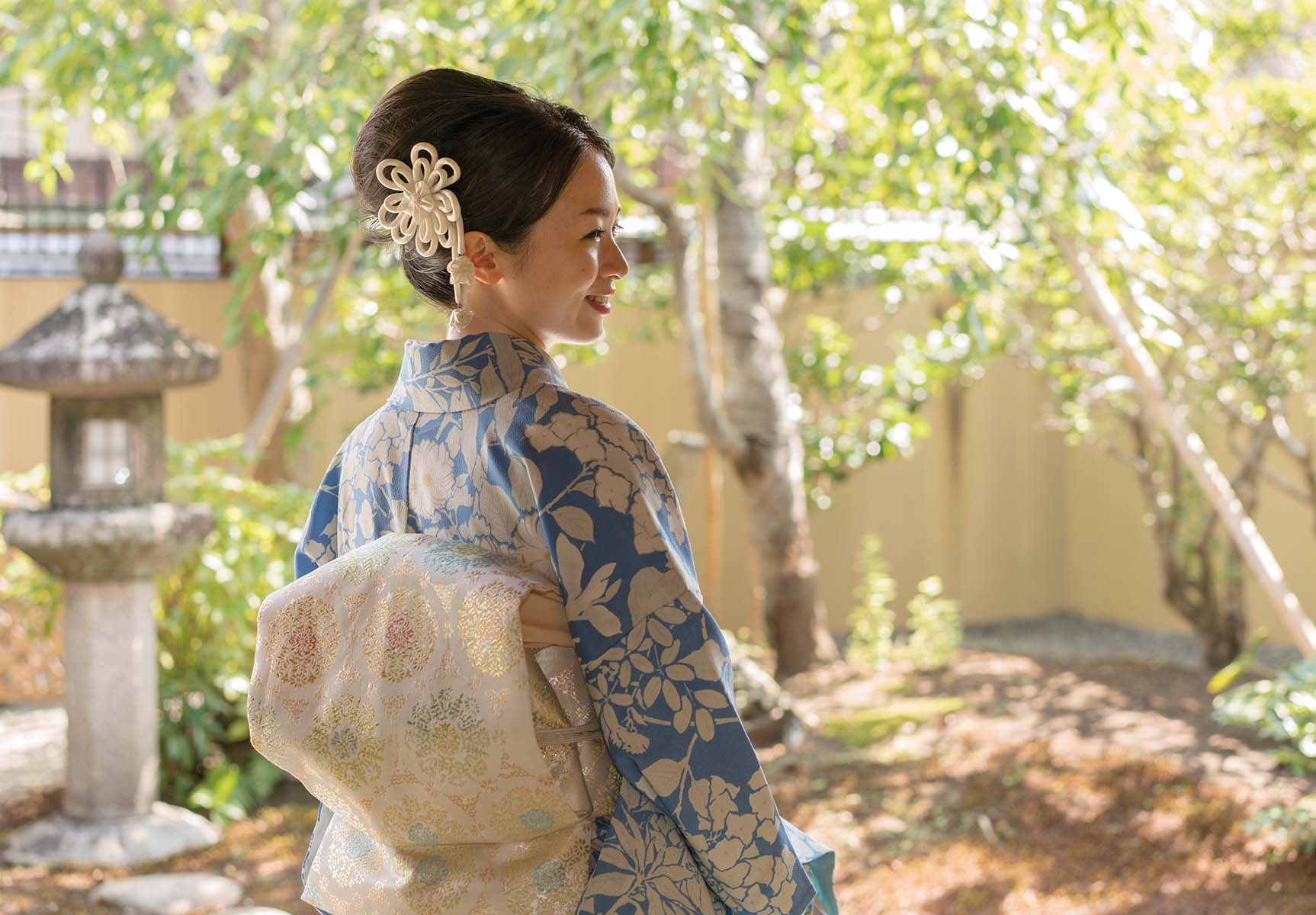 Posted at 08:21h in FEATURED by whykyoto

Beautifully drawn patterns adorn kimono. The techniques are divided broadly into ori (weaving) and some (dyeing). The ori technique involves preparing dyed threads that are woven into a fabric by changing the thread to match the pattern. The fabric is fi nished as a roll of cloth, and then sewn and fi nished in the shape of a kimono. On the other hand, some is a technique in which the pattern is dyed directly onto white fabric.

Yuzenzome is the most representative dyeing technique in Japan. With the ori technique, which has a longer history than yuzenzome, the pattern is drawn by combining the linear warp and weft strings precisely to create a pattern similar to the dots, or pixels, in computer graphics. Of course, with advanced skills, fi ne curves can also be drawn, but yuzenzome is a technique that makes the dyeing of patterns using elegant curves possible. Paste is placed in very thin lines on the outline of the design, and then the area inside of these lines is dyed using paint brushes and other tools. With this technique, curves can be drawn by a person by hand, so they are even more elegant. Additionally, the paste acts as a divider, preventing adjacent colors from bleeding into one another. For these reasons, the patterns can be drawn with vitality.

The birth of yuzenzome was in the Genroku era of the Edo period (1688-1704). Legend has it that yuzenzome was the idea of the fan painter Yuzensai Miyazaki, who lived in Gion in Kyoto. The yuzenzome developed in Kyoto and subsequently spread to other areas. Among these areas, Kyoto’s Kyo-Yuzen has gained an outstanding reputation worldwide for its splendor and elegance.

THE PROCESS OF HAND-DRAWN YUZEN

Here is a simple introduction to the process of hand-drawn yuzen. Hand-drawn yuzen uses a division of labor employing many specialists. First, the design is created (photograph 1). There are various designs from classic to modern. The design is then drawn on a piece of paper at a quarter of its size. Next, the design outline is drawn (photograph 2). The design is transferred to white fabric sewn into the shape of a kimono. The design is not enlarged and then transferred as is to the fabric, but rather it is drawn freehand by the artisan while looking at the design. Taking into consideration the kimono’s shape as it is worn, the artisan decides on the size and placement of the design. At this time, the artisan is painting with liquid from a fl ower called spiderwort. The cultivation of spiderwort has decreased in recent years, making it very precious. When the drawing of the design is fi nished, the kimono is temporarily unfolded. Then the paste is placed along the outline of the design (photograph 3).

A kimono made from one roll of cloth cannot have any variation in the density of the color from one edge to the other. After covering the design with paste, the fabric, which is 13-15 meters, is dyed quickly and evenly with the hake brush in the jizome dyeing process (photograph 4). Next is coloring (photograph 5). Expressed as “introducing the color” in yuzen, it is one of the processes in hand-drawn yuzen that requires the most skill. The colored fabric is then steamed to fi x the color, and washed in water. When the yuzenzome has been completed on the fabric, it is decorated with embroidery (photograph 6) and other embellishments, and then fi nished.

WEARING THE BEAUTY OF SPACE 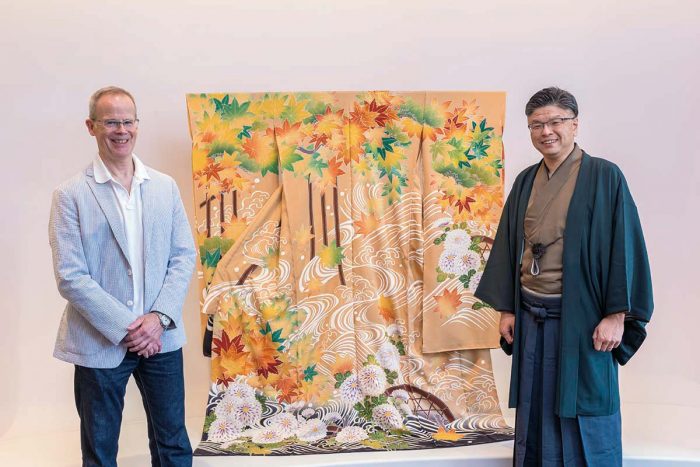 CHISO, which is located a little west of the intersection of Sanjo Street and Karasuma Street in Kyoto, is a well-established Kyo- Yuzen company founded in 1555. Focusing on kimono with traditional Japanese patterns, they have used their skills and ability to design and deliver a variety of items to the world.
“A woman wearing a kimono is really beautiful,” muses John Benson. He came from America to Japan as an English Conversation teacher in 1977, and has been living in Kyoto ever since. “Yes, it is a beauty that is quintessential to Japan,” responds Yasushi Nakata, who is the president of CHISO, with a smile. These two old friends are speaking of yuzenzome kimono.

When Mr. Benson was asked for his impression of the kimono, he replied, “If you look closely at the kimono, the space where there is no pattern is also beautiful. In Japan, it is called the “space”, but it is how the space is created and its beauty, which feels very Japanese.” The beauty of the “space” mentioned by Mr. Benson is a distinctive feature seen in much of Japanese culture. You could probably say “white space” instead of “space”. It is not that there is something there, but it is space created on purpose. It is applicable to the tea ceremony, fl ower arranging, and even the martial arts. “The fact that John, who is American, is aware of the beauty of the “space” where there is no pattern makes me very happy, and it is a very interesting perspective,” say Mr. Nakata. 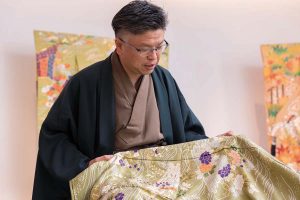 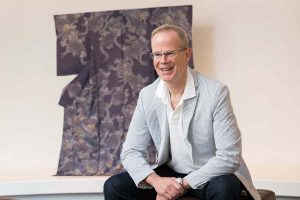 Mr. Nakata also said this. “It is said that a fan painter called Yuzensai Miyazaki started yuzenzome, but I do not think that. In the Genroku era, the paintings of Yuzensai were very popular. Therefore, it is easy to imagine that there were many people who wanted to use his paintings on fans and other items. I think that he was not a single painter, but a type of artistic director.” When placing Yuzensai’s paintings on a kimono, it was better to draw them directly by hand rather than to be at the mercy of the linear vertical and horizontal threads used in weaving. Perhaps, artisans thinking in this way thought up placing paste on the outlines and masking during a process of trial and error says Mr. Nakata. “In other words, yuzenzome was not a technique used for dyeing by Yuzensai, but rather a technique developed to dye Yuzensai’s pictures. There must have been an art group that was keenly aware of the period’s trends.” Even today, many artisans participate in yuzenzome. In the past, CHISO contracted those artisans and was in the position of creating kimonos, but now it does not end there. For example, they have produced other fashion items using yuzenzome designs and techniques. For more than 20 years, items they have produced have appeared in the Paris Collection and have garnered an outstanding reputation worldwide.

The information is current as of August 2016.