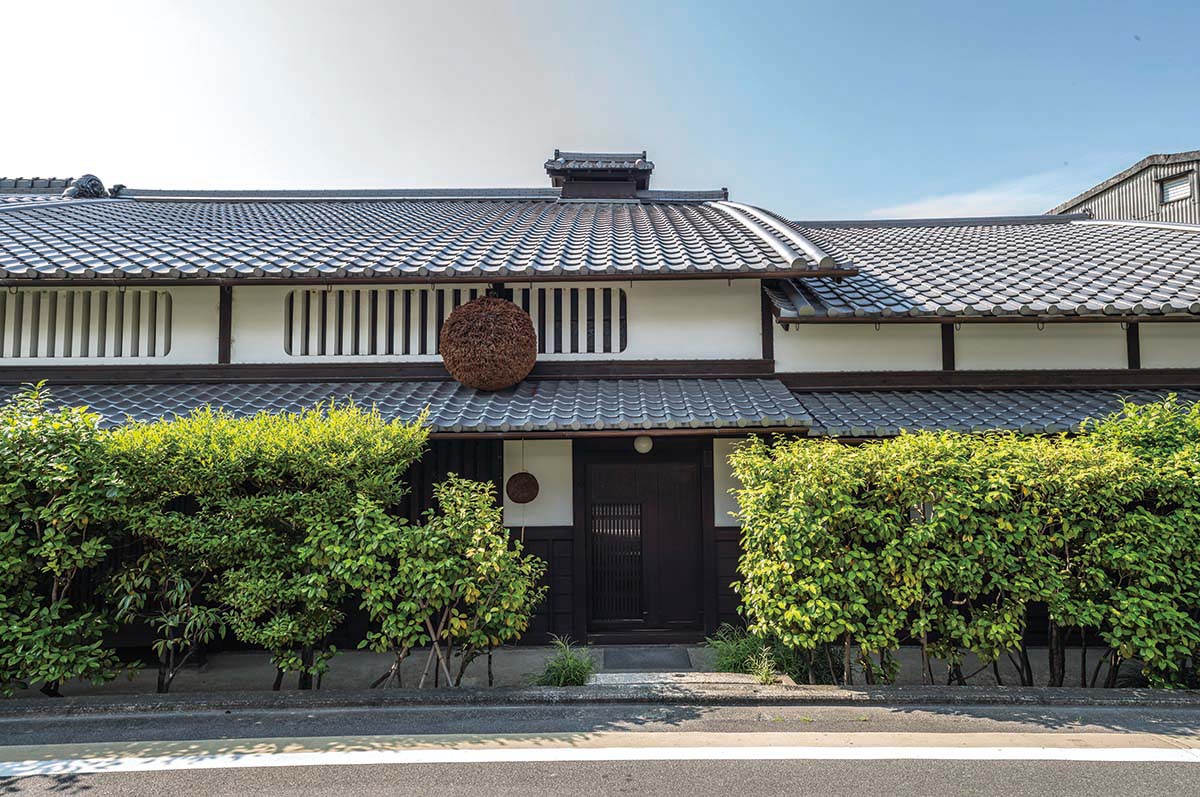 Aug 31,2015 What are the particularities of fushimi area?

Posted at 07:19h in FEATURED by whykyoto 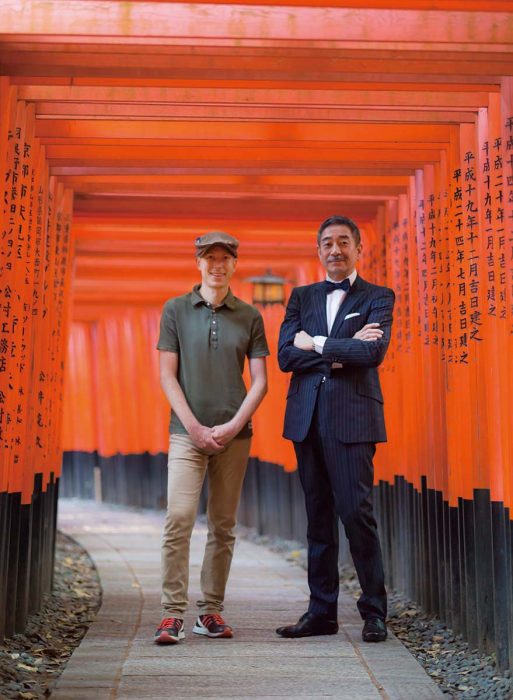 The Fushimi area of Kyoto is home to Fushimi Inari-taisha Shrine, voted most popular tourist spot in Japan by foreign tourists on TripAdvisor, the world’s most extensive travel website. Fushimi is also known as one of the leading areas for Japanese sake. Learn about the wonders of Fushimi and Japanese sake from Mr. Tokubee Masuda, the 14th-generation owner of Masuda Tokubee Shoten, Fushimi’s one of the oldest sake breweries; and Mr. Jason Davidson, leader of JD Kai, an organization for enjoying Japanese sake in Fushimi.

Two local train stops away from Kyoto Station, Fushimi Inari-taisha Shrine is the head shrine of some 30,000 Inari-shrines throughout Japan and is well known for boosting business. Established in the year 711, it has one of the longest histories of the many old shrines and temples in Kyoto.
Visitors to Fushimi Inari-taisha Shrine are impressed by the long succession of red torii gates known as the “thousand torii.” The custom of dedicating torii to the enshrined deity as an expression of prayer and gratitude was already entrenched during the Edo Period (1603-1868), and the line of torii is a monument to the many dedications of people showing their reverence. Around Inari-yama Mountain are many smaller shrines and mounds. “[Fushimi Inari-taisha Shrine] is famous for the thousand torii, but there is also a great view from Yotsutsuji on the mountainside,” Mr. Masuda said. Mr. Davidson added, “You feel a mysterious power when you walk around on the mountain.” The white foxes located here and there on the shrine grounds are the messengers of the Inari shrine deities. Be sure to look out for these extra sights as you walk around Fushimi Inari-taisha Shrine.

Fushimi is well known for the high quality and quantity of its groundwater. On the grounds of Gokonomiya Shrine near Kintetsu Momoyama Goryo-mae Station is Gokosui, an active spring selected as one of the top 100 water sources in Japan.
Such wonderful groundwater is the reason Fushimi joins Nada in Hyogo Prefecture and Saijo in Hiroshima Prefecture in the top three sake-producing areas in Japan. “The water in Fushimi is medium-hard with a good balance of minerals,” Mr. Masuda said. “It has a mellow fl avor and a delicate smoothness to it.” The water in Nada is hard, leading to sakes with a crisper fl avor than those of Fushimi. Fushimi is currently home to more than 20 sake breweries. Chief sake brewers are known as toji. Toji appear at the breweries during brewing season and stay there for months on end as they work. Toji determine the fl avor under the direction of kuramoto (brewery owners) and set kurabito (workers) in motion. “Sake is a living thing – you cannot simply make the same sake every year,” Mr. Masuda said. “It is like wine in that respect.” Indeed, the condition of the rice and koji mold, the weather and other factors create a different situation for brewing sake each year. Some of the process has been quantifi ed recently, but the deciding factor is still an intuition cultivated over many years. “Perhaps not intuition, but water – you never quite know what is in it,” Mr. Masuda continued. “Water determines the taste of sake, so a steady stream of water whose high quality never changes is a precious thing.” 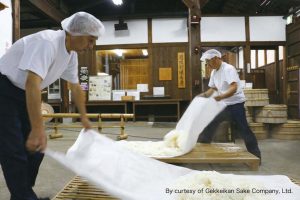 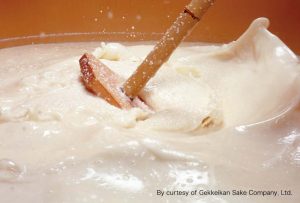 AN EXTRAORDINARY TASTE BORN FROM A GRAIN OF RICE

It goes without saying that the basic ingredient of sake is rice. Wine is made by fermenting grapes, but rice will not ferment if left to its own devices. This is why koji-kin (a mold that grows on cooked rice) is used for sake brewing. Koji is a vital part of Japanese food culture that is also used to make miso paste and soy sauce.

Here is a simple explanation of the sake brewing process. First, rice is milled and steamed, and the extent to which the rice was milled determines the rank of the sake. Daiginjo-sake is the highest-ranking sake, where rice grains have been milled to 50% or less of their weight as brown rice grains. Next is ginjo-sake, with a milled weight of 60% or less. The lower the milled weight, the purer the taste. However, some people like off fl avors; there are many different ways to enjoy sake. 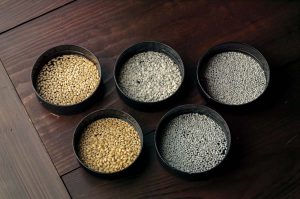 The quality of the sake depends on the percentage of milled rice used to make it.

The koji-kin sprinkled over steamed rice reproduces to form koji. Then steamed rice, water and yeast fungus are added, and the mixture is left to ferment. The result is shubo, a yeast mash. More steamed rice and water are added to the shubo, which ferments for roughly one month and is then fi ltered. The fi ltered sake is aged further, then sterilized at a low temperature and bottled. Which procedure is the most important? All of them, according to Mr. Masuda. “To brew delicious sake, you need to make good koji. To make good koji, you need steamed rice that is nice and plump with water. Each process is connected to the others, and thus is connected to the taste we seek.”

As you walk around the town of Fushimi, you will see round objects hanging from the edges of the eaves of sake breweries. These are sugidama (cedar sprigs woven together and closely clipped in a spherical shape), hung by kurabito to indicate that they have completed a new batch of sake. 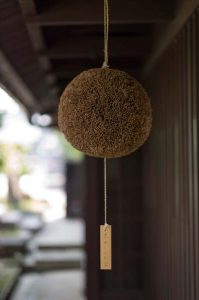 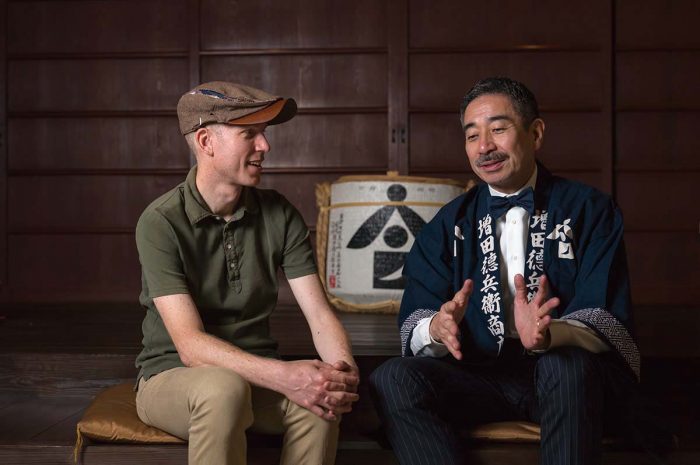 Mr.Davidson hails from the United States and now lives in Fushimi. Asked about how to enjoy sake, he replied, “There are as many ways to enjoy sake as there are people – there are infi nitely many.” In contrast to the stereotypical image of pairing sake with a meal of sushi, Mr. Davidson offered many alternatives. “Sake goes well with pasta. It’s like a white wine. Kyoto sake was always made to be enjoyed with food. I want people to try sake with various foods and enjoy exploring different tastes. There are shops that will choose small ochoko (sake cups) for you, and it is fun to discover how the vessel can change the taste.” As it turns out, Mr. Davidson has quite the collection of ochoko.

“Recently we have seen lightly sparkled sakes like champagne, and older sakes aged for so long that the colours change,” Mr. Masuda said. “By the 17th century, Fushimi sake was already being made similar to the way it is made today. We create new varieties with reverence toward that tradition. This fusion of old and new might embody a spirit distinctive to Kyoto.” It is said that people brought sake brewing to Japan from the Asian continent in the eighth century. Over 1,000 years later, Japanese people still offer sake to the gods and drink it in celebration. In the city of Kyoto, there are regulations to promote toasting with Japanese sake, and sake is a vital part of life. Why not raise an ochoko of sake with your next Japanese meal? 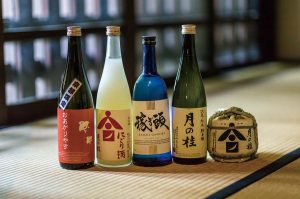 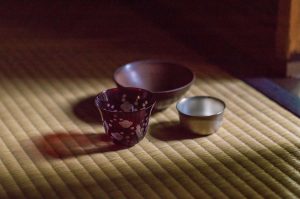 The information is current as of July 2015.