Posted at 08:14h in FEATURED by whykyoto

Boatmen who supports the exciting experience 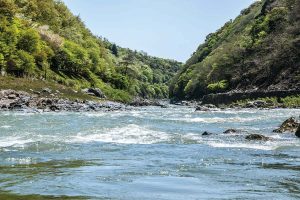 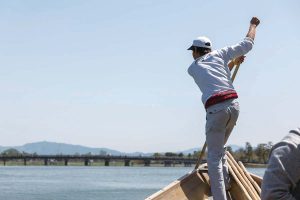 Mr. Morita, who entertains passengers with his rhythmical talk peppered with English words, is a veteran boatman with 20 years of experience. He talked with us about the special work of the 120 boatmen who row the Hozu River. “This job has been handed down through the generations, the fathers and the grandfathers were all boatmen, some families have 5 generations of boatmen. About 25 years ago they began publicly hiring for boatmen positions and I applied for the job, even though I had nothing to do with it. Until then, the only people who became boatmen were sons, brothers, relatives and acquaintances of the boatmen themselves. You could not work as a boatman unless you were recommended by a boatman.” Even now not everyone who wants to become a boatman can become one; the only people eligible are those who live in Kameoka City, Yagi-cho in Nantan City, or people who are planning on moving there. “The reason for this is because it is a job where nature is our constant partner. It is important for the boatmen to be able to get there and start working as soon as we can in the event of typhoons and heavy rains that block the river routes. We watch over the nature of Hozu River and live alongside with what can be at times cruel nature”.

Mr. Morita’s workplace is the Hozu River. He has been actively involved in environmental conservation activities from about 15 years ago. “We periodically gather trash and invite other organizations. We gained the cooperation of companies and public administration while we continued our efforts to beautify the river”. Even though Arashiyama is a touristic place, it cannot be said that awareness towards the environment is suffi cient. The boatman must provide safety and enjoyment during the boat ride but must also spread the word on the environmental conservation of Hozu River as well.

During the busy season in spring and autumn, about 100 ships will operate in one day. The boatmen go down the river, then take a train back and repeat this again and again, which require both energy and stamina. Basically there are 3 people in a team, one in charge of kajitori (rudder operation), the other in charge of kaihiki (paddling), and the third one in charge of saosashi (pole pushing). Depending on the level of the river, 4-5 people may work on one boat. “Teamwork is very important so for one year we operate on the same team to operate the boat. We want to convey this unique Japanese culture of boat rowing through narrow valleys”. 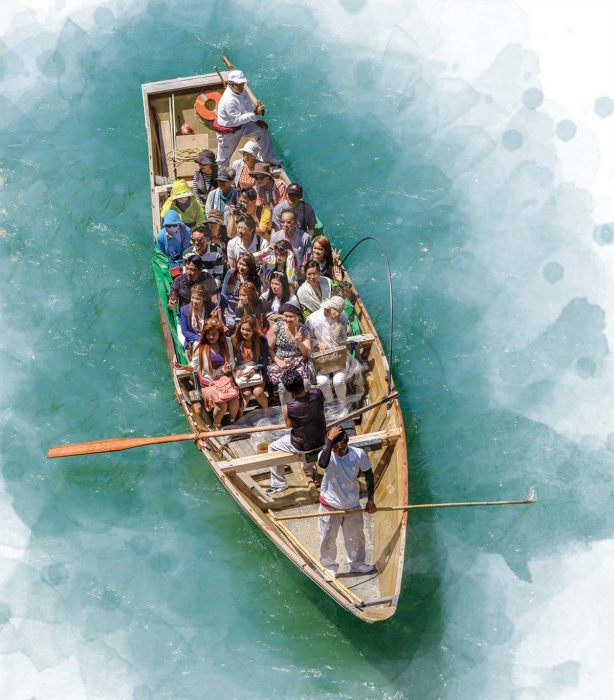 Passion poured in crafting a boat 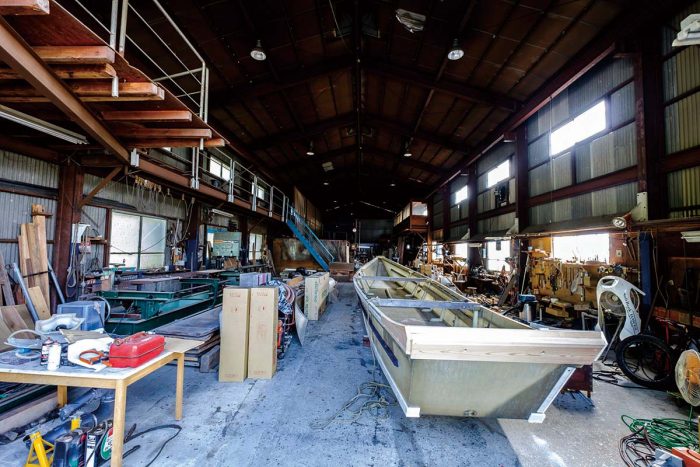 Asimple boat that seats 30, with a total length of 12.2m, made from a base of reinforced plastic used to shape the boat and a frame worked with cedar trees. One boat takes about 45 to 50 working days to complete and only 1 or 2 boats can be made in one year. Mr. Yamauchi who works with the boat in a large workshop used to be a boatman, but when the senior carpenter retired, he became a carpenter himself. “Until about 1970, the boat was made completely from wood but we now use reinforced plastic, a much superior material. The thickness of the boat bottom is only 1.3cm. It must be thin enough so it will curve with strong water fl ow. If it is too thin, then it will crack and the water will leak in. I use the best thickness and angle to create the boat”. He listens to the boatmen and their requests and creates the boats and paddles from scratch. Mr. Yamauchi’s concentration is maintained by his wishes for the boat to carry the riders to Arashiyama in safety.

The information is current as of May 2016.