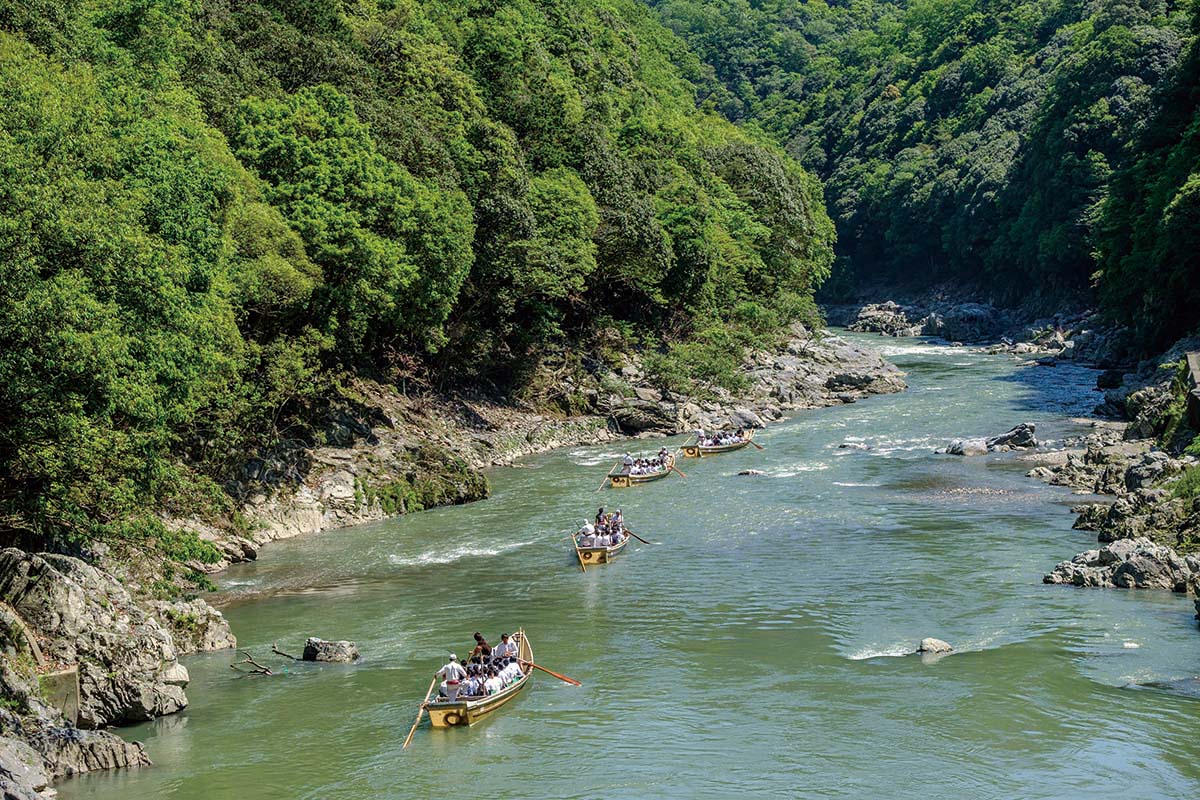 Posted at 08:04h in FEATURED by whykyoto

Leave Kameoka City which is on the west side of Kyoto City, and hop on the 2-hour, 16km journey to Arashiyama on the Hozu-gawa River Boat Ride surrounded by nature. You can enjoy the blossoming cherry trees in the springtime, the changing color of the foliage in autumn, the snow-covered scenery in the winter and the fresh greenery of summer on the boat voyage. Kyoto is not just temples and shrines, so discover all of the charms of Kyoto! 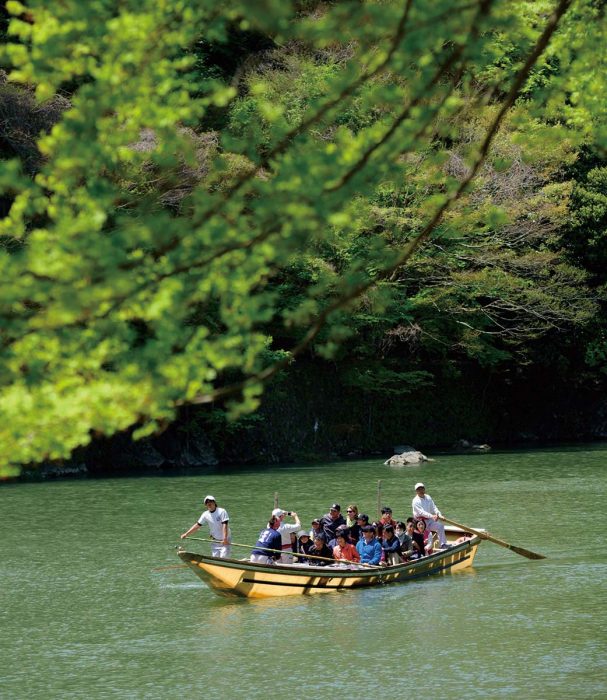 The river fl ows gently in some places, and there are places where the water rushes, spraying water all over. The Hozu-gawa River Boat Ride is where you can ride down the Hozu River safely and in comfort due to the superb pole work by the boatmen. Hozu River starts at Kameoka in the Tamba area of Kyoto and fl ows through the Hozu Valley to Arashiyama, and is another name for Katsura River. It started to be called Hozu River because of a town called Hozu-cho. The Hozu-gawa River Boat Ride started around 1895, maneuvering between large and small rocks that appear one after another along the river. Until that time, Hozu River was used for water transportation to carry goods to Kyoto and Osaka. In 1606 Ryoui Suminokura, who was called the “father of water transportation,” developed the waterway to send Tamba goods like wood, grain, charcoal and such to Kyoto. With the opening of the railway in 1899 and development of trucking transportation, water transportation kept being used for a while, but slowly disappeared. The Hozu-gawa River Boat Ride has now shifted to become a tourist boat ride, enjoying and appreciating the beauty of the Hozu Valley. 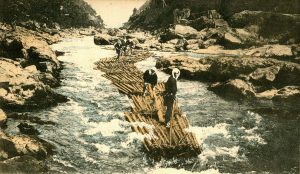 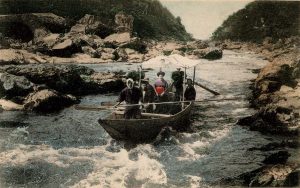 Moved by the many attractions and the boatmen’s warm hospitality

Deryl, on a day blessed with fi ne weather, challenged the Hozu-gawa River Boat Ride for the fi rst time. Deryl left Africa, where he lived since he was a child and travelled all over the world as a young adult before landing in Kyoto. He operates an English Conversation School near Arashiyama, and enjoys getting out of the busy city during his days off. “I enjoy water sports such as canoeing and fi shing and have come to Hozu River many times, but I have never experienced Hozu-gawa River Boat Ride so am really looking forward to it.” 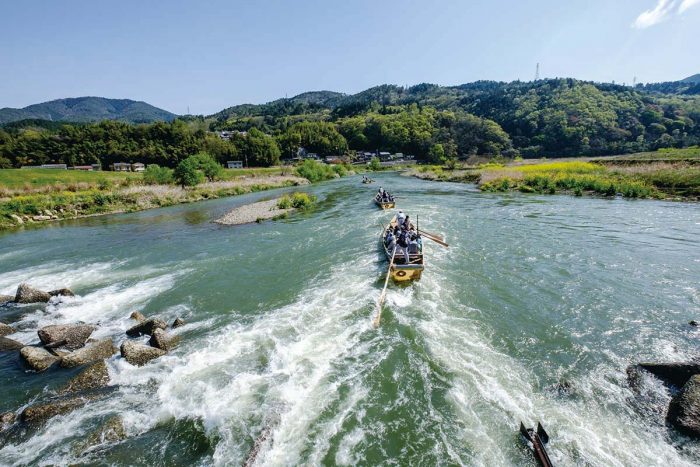 Listening to the boatman Mr. Morita’s talk with a smile, Deryl’s boat ride starts. The creaking of paddles serves as background music as the boat glides smoothly on the water. He encounters rocks that look like lions and frogs, those with “pole holes” made by poles being poked in the same place over the centuries and rocks with rope grooves from when the boats were pulled up the river using manpower. These expose passengers to the history of this river ride. If you are lucky, you may see the Sagano Torokko Train and feel the warmth of the passengers on the train who will wave back at you. “In the spring cherry trees bloom and in the summer ayu (river fi sh) can be fi shed. There are 2 billion 5 thousand year-old land formations that can be seen, and lovely ducks that can be found… The scenery changed while riding the boat and it was very enjoyable,” refl ects Deryl. 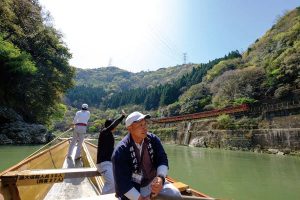 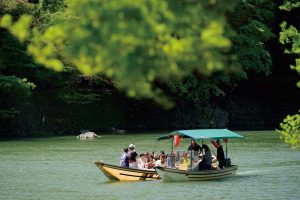 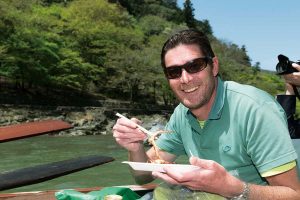 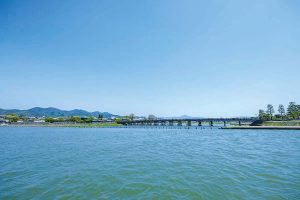 What Deryl was impressed with, along with the scenery was the hospitality of the boatmen. “Very Japanese, you will not see such boatmen who will row to suit the passenger anywhere else. You can tell that the boatmen are really trying their best to consider the enjoyment of the passengers”. Towards the fi nal part of the river trip a boat store that sells grilled squid, oden (simmered fi shcake and other ingredients) and other products row to the side of the boat. “The store sells sake, dango (rice cake ball on skewer) and other stuff and is really interesting.

Kyoto always has an image of temples but one becomes bored viewing one temple after another. I would highly recommend the Hozu-gawa River Boat Ride to friends and everyone because it is full of many moving moments.” 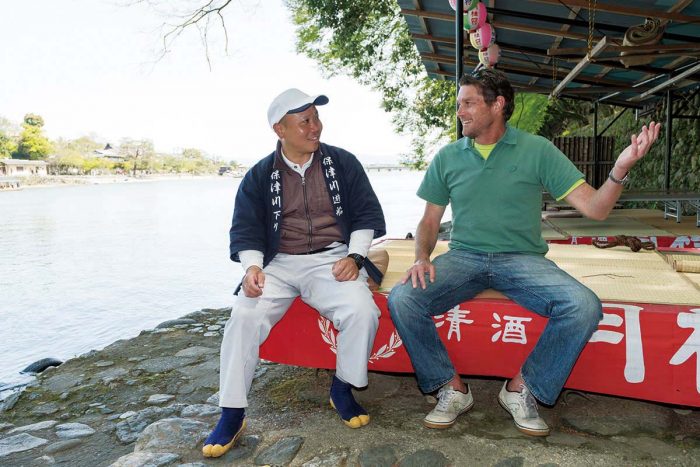 The information is current as of May 2016.