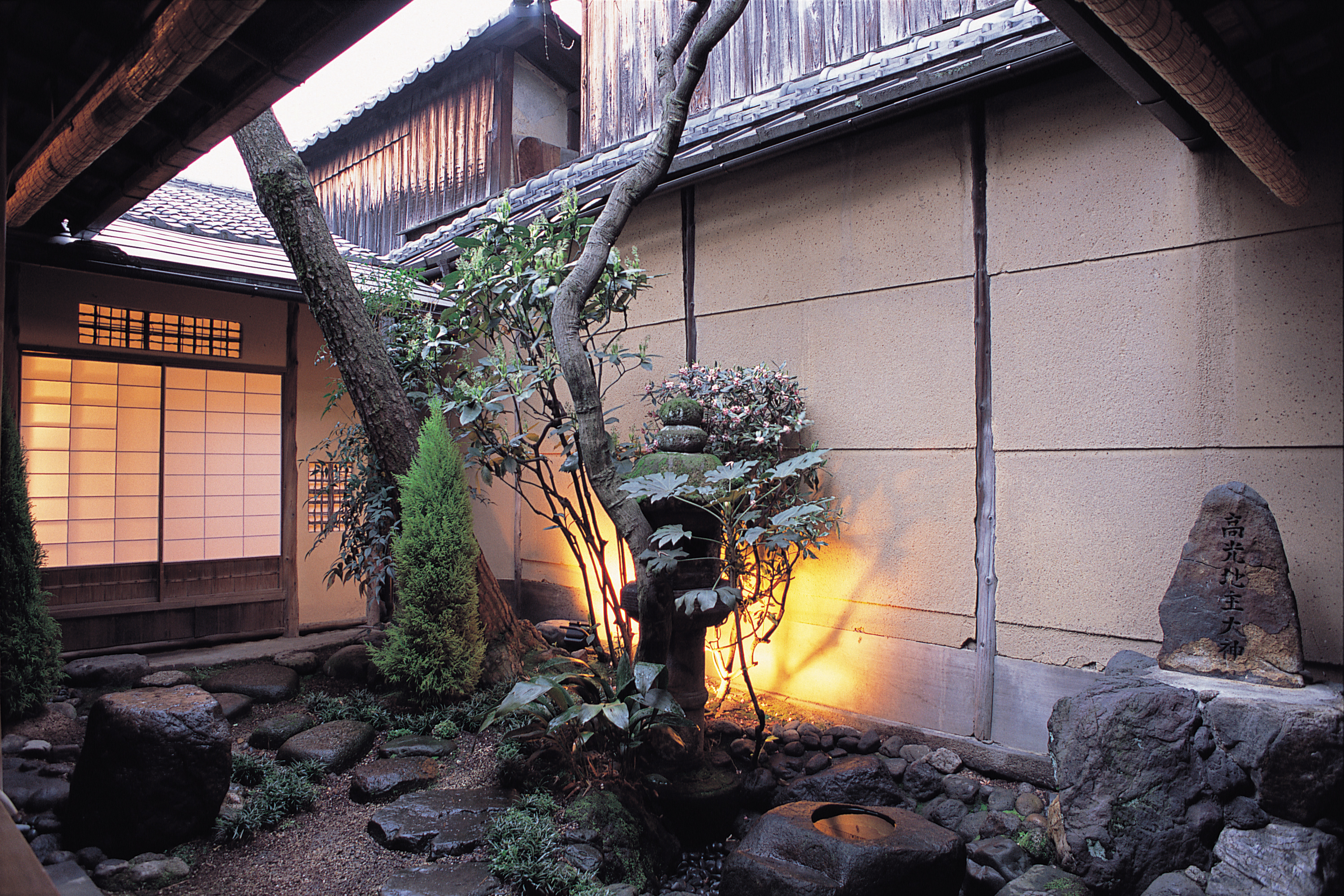 Posted at 11:30h in FEATURED by whykyoto

In reality, a kyomachiya townhouse does not have a clear definition, but it is the residence of the townspeople of Kyoto. It first appeared in the 8th century when Kyoto became the capital of Japan in 794. Called the Heian capital, the city was modeled on the grid-like pattern of Chang’an (present day Xi’an), the capital of Tang Dynasty China. Because the Jo-bo grid system was adopted, in which the streets run vertically and horizontally, the houses line the streets in an orderly fashion. Kyoto, which flourished as a capital city for 1,200 years, subsequently became a commercial town at the start of the 18th century, and its population increased. Along with these changes, a style of house that 1) had storefront space facing the street and 2) ensured a living space in the back began to become popular. Based on its narrow, but long shape, this style of house was called an “eel bed (unagi-no-nedoko)”. Many of the machiya townhouses that can be seen in present-day Kyoto have been standing for 100 to 120 years.

A . Mise-no-ma (Shop Space)
This is a room that faces the street, providing storefront space for commerce. In Kyoto, the integration of business and living spaces is commonplace.

B . Zashiki (Reception Room)
This room, to which only valued guests are invited, is at the rearmost of the house. The room is decorated to suit each season by doing things, such as placing flowers in an alcove. The floors are covered in the traditional tatami  flooring as is the Mise-no-ma (Shop Space), so visitors must remove their shoes before entering.

C . Engawa (Veranda)
This is a place like a hallway built jutting out from rooms facing the garden. Kyoto summers are hot and humid, therefore the veranda is a good place to enjoy a cool breeze.

E . Hashiri-niwa (Hallway Garden)
This is a private area located near the kitchen normally used by the family and its servants. A high ceiling contains a high window and a skylight to allow smoke to escape and also to provide light. 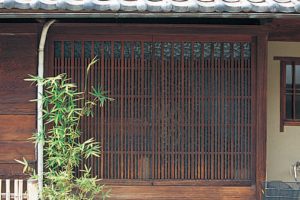 Koshi (Lattices)
The wooden lattices are functional, allowing what is happening outside to be seen by those inside while preventing those outside from seeing in. The tops are cut to allow more light in, and there are a variety of designs that are often seen in the patterns of kimonos. 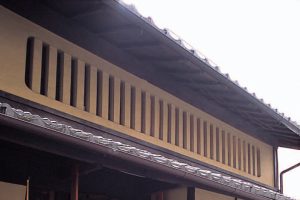 Mushiko-mado (Insect Cage Window)
This window is located in the plastered wall of the distinctive, low second floor of kyomachiya townhouses over 120 years old. The window was named after its shape, which is similar to an “insect cage”. It was built to provide the second floor with air and light. 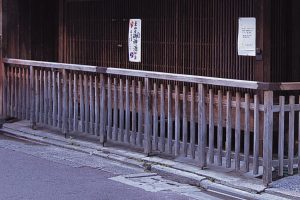 Komayose (Horse Fence)
The name remains from a structure, which was used in the past for customers who came riding on horseback for tying the reins. Legend also has it that the fence was built to prevent people and horses from invading the house. Its exclusive air lends dignity and nobility to the townhouse’s exterior. 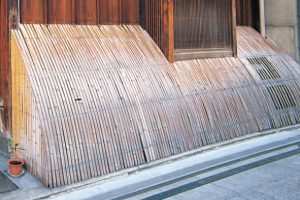 Inuyarai (Short Arched Fence)
This fencing is made of bamboo and surrounds the house to protect its walls from being splashed by rain or by dog’s marking territory and create a buffer between public and private. Its simple curved beauty gives the townhouse a gentle expression. 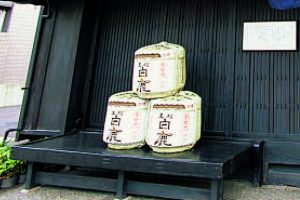 Battari Shogi (Folding Bench)
Built into the wall of the eaves of the townhouse, the bench can be folded up and down as needed. It played the role of a display case for merchandise as well as providing a place to sit and enjoy the evening breeze, and for social interactions with neighbors. 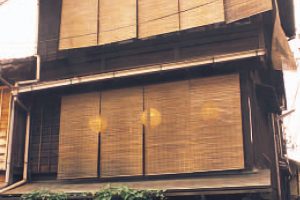 Sudare (Bamboo Screen)
The screen helps to circulate air to cool the hot, humid Kyoto summers. It also plays the role of a sunshade and a blind, providing respite from prying eyes as well. It is woven from materials, such as bamboo and reeds. 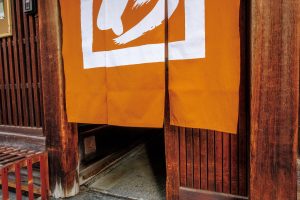 Noren (Curtain)
It contains the name of the shop and comes in a variety of colors and materials. It is the face of the townhouse and provides the fun of giving the townhouse a facelift for each of the changing seasons. It signals that the shop is open. No noren- the shop is closed. 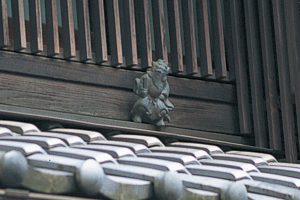 Shoki-san (Guardian God)
A decorative ceramic figure mounted on the roof. He is said to originate from China and is worshipped as a god who is a good luck charm against evil spirits. Many have forbidding, sharp eyes, but there are also some with milder expressions. 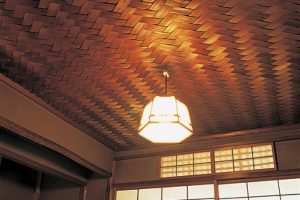 Ajiro-tenjo (Woven Ceiling)
A woven ceiling made with thinly split wood or other material; it is often seen in tearooms or in rooms in the sukiya-zukuri architectural style. The craftsmanship and time-consuming work are impressive. 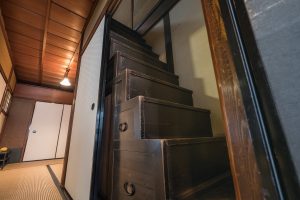 Kakushi-kaidan (Hidden Staircase)
To secure space in the narrow kyomachiya townhouse, many stairs
have an extreme slope, and many used closet space for stairs. Therefore, since they are hidden in the back of the closet, they are called “hidden staircases”. 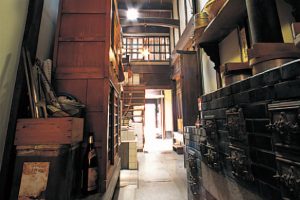 Tori-niwa (Passage Garden)
An earthen path that continues from the front to the back entrance, it is divided into the front “Miseniwa (Shop Garden)” and the private space of the “Hashiriniwa (Hallway Garden)”. In the deep kyomachiya townhouse, it is the path providing air circulation. 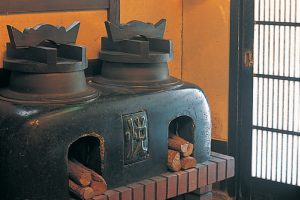 Okudo-san (Cooking Stove)
A cooking stove located in the hallway that is currently the kitchen is affectionately called the “Okudo-san”, only in Kyoto. It is installed in the kitchen, which is located in about the middle of the “Hashiri-niwa (Hallway Garden)”. 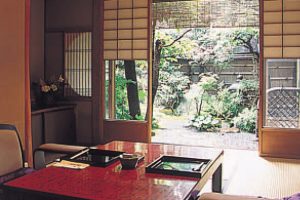 Zashiki (Reception Room)
This room located in the rear of the house faces the garden and is used to entertain guests. In the case of a large room, it becomes a two-room suite, with design elements in different woods, such as different shelving
and transoms. 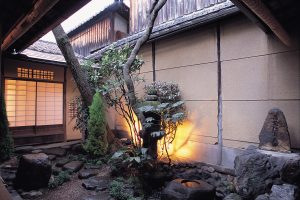 Tsubo-niwa (Inner Courtyard)
A small garden established in the rear or middle of the building that came about to provide both air circulation and light in these long and otherwise dark houses. A garden located in the front is differentiated by calling it “Zensai-niwa (Front Garden)”. 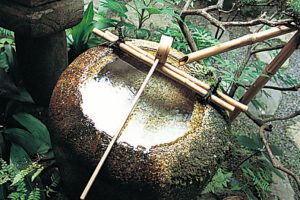 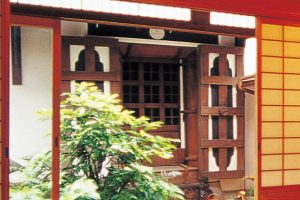 Kura (Storehouse)
A building for the safe storage of the family’s valuables, including money and merchandise, the walls were covered in a thick plaster. Even in mid-summer, the interior remained cool.